For my second blog interview I went behind the scenes at one of the coolest bars in Rotterdam! Located under an old train track in the new hotspot “De Hofbogen”, Eurotrash United is a unique combination of craft beer bar, live music venue, and exotic Surinamese and Caribbean cuisine all in your favorite vintage living room. Two weeks ago on a very warm spring day I had the chance to talk with René Stoop, the floor manager, and learned all about how he came to work for Eurotrash, the story behind the eccentric beer labels and how art fueled the Eurotrash concept.

From music to bar manager

To work in a craft beer bar you obviously have to love beer, but René’s first love is really music. He studied music management in Utrecht before moving to Rotterdam for an internship at Rock & Roll high school. In fact, his graduation thesis was about turning the – then empty – Hofbogen into a music venue. His thesis defense was in the exact same location as what is now the Eurotrash bar. There was no light or water and the windows were boarded up. All he had was a table, a laptop and a beamer, with which he could project his presentation on the wall where now the Fritz-Kola fridge is on the right side of the bar. Coincidence? Sounds to me like it was meant to be! Ever since his graduation his jobs have been related to music. Before joining Eurotrash, he worked at festivals such as Lowlands and was managing bartender at Rotown. Then in October 2016 he met Mathijs Goorhuis, one of the four founders of Eurotrash United, and he came full circle, back to the Hofbogen.

Did the bar turn out as he had imagined during his graduation project? “Even better!” he says candidly. “We never envisioned these arches would be filled with all these cool bars, restaurants and stores to become the thriving urban area it is now. As for the Eurotrash bar, it is such a fun and inspiring environment to work in. Mathijs and I run the day-to-day operations and are responsible for the craft beers on tap, the live music and everything else that is involved in keeping things running smoothly. Hosting a live music show every weekend proved to be too much though, so now we do it roughly twice a month. Things still get crazy sometimes. Our St. Patrick’s Day party was probably the busiest event since opening night. Drunken Dolly performed here and had brewed a red ale together with local brewery Drift for the occasion. We went through all five kegs in three hours; everyone was drinking like there was no tomorrow, but we managed to pull it off without a glitch! We were really proud of that.”

Eurotrash is a real craft beer bar, but don’t expect an extensive page-turning beer menu. They prefer their brews fresh, so you get to choose from twenty awesome craft beers they have on tap. They’re also an approved Dog Dealer, meaning that they serve a different BrewDog special on draught every month. I like that they mix it up a bit and serve ‘trendy’ craft beers as well as the classic ones, like Rodenbach Grand Cru, La Trappe and Guinness. Can we still speak of a craft beer revolution? “The craft beer scene has really exploded in Holland and is still expanding”, he replies, “but the sky isn’t the limit anymore. If you are just getting started as a brewer, you’ve missed the boat. The chances of becoming one of the big names now are extremely slim I think.”

One of my favorite questions to ask is: what was your biggest fuck-up? “Surprisingly, we haven’t had any since we opened in April of last year. I did put my foot in it at the St. Patrick’s Day party though, that was pretty embarrassing. I saw the bouncer talking to a girl wearing a shirt that was clearly not her own. It was like a huge tank top and you could pretty much see everything through the arm holes. I told him she might as well not have worn a shirt at all. Turns out, she was his girlfriend, haha! Luckily he’s wasn’t offended, we’re still on good terms.”

Eurotrash Brewery was founded in 2007 by artist couple Arno Coenen and Iris Roskam – known for creating the famous ceiling of the Markthal ‘Horn of Plenty’. Together they have done other fantastic projects like the Beurspassage on Amsterdam’s Damrak and the beautiful woodwork on the terrace of Wunderbar on Witte de Withstraat. Arno was an avid homebrewer and had been brewing beer since he was in high school. The Eurotrash concept was first conceived as a brand and artistic project – Newskool Beer from the Old World – before there actually was a Eurotrash beer. Then came Kaiser Küttlipp II, Snorella, Schwarzwald, Schwule and several other beers. One thing led to another and in 2016, together with Ron Sterk and Mathijs Goorhuis, work was started on creating their own brewpub. The brewery has not yet been installed, so for now they are brewing their beers at Brouwerij Noordt, a mere few blocks from the bar. Toko Trash has recently taken up residence and serves delicious Caribbean and Surinamese food (and bless the beer gods, they have vegan options!).

Next time you visit the bar, be sure to give yourself a minute to take in the artwork. Every nook and cranny tells a story and is a feast for the eyes! The ceiling painting above the entrance portrays the four owners. To the right of that are artworks by Lastplak, Guus van Vugt, Ivarr and Trompette de la Mort. On the left, above Toko Trash’s kitchen, there is a new ceiling painting perfectly capturing its colorful and tropical character. The bar with its wood burning designs (pyrography) is in itself a work of art. The same technique was used to create the portraits hanging on the wall. Apart from the fact that they are all Europeans, I have not quite figured out what connects them (I mean Angela Merkel vs a Muay Thai world champion and a Hungarian bloodthirsty countess, what??). If you figure it out, let me know!

The story of the beer labels

So what is the story of their flagship beer Kaiser Küttlipp II, with a very German looking monarch on the label, and his Kaiserin Snorella? They are not mere portraits, but actually live characters who made an appearance at the bar’s grand opening last. The Kaiser is in fact based on its creator’s own likeness. Martyn Overweel (edgy cartoonist and a friend of Arno Coenen) drew him as a self-portrait dressed as Emperor Wilhelm II, the last German Emperor and King of Prussia. However, the Kaiser needed a Kaiserin. Enter Snorella: Amsterdam’s hairy-chested drag with a moustache, front woman of The House of Trash, and Micha Schneijderberg when he’s not wearing a dress. A multi-talented voice-over, actor and coaching professional, who rocks high heels like it’s nobody’s business. An unlikely couple perhaps, but then again Eurotrash is a story with a twist.

If you don’t believe me, go see for yourself!

Eurotrash United is located at Vijverhofstraat 10 in the trendy neigborhood Zomerhofkwartier, about a ten minute walk from Central Station.

*UPDATE: Eurotrash United closed its doors in June 2019. It will be replaced with a new brewpub. More information to follow soon.* 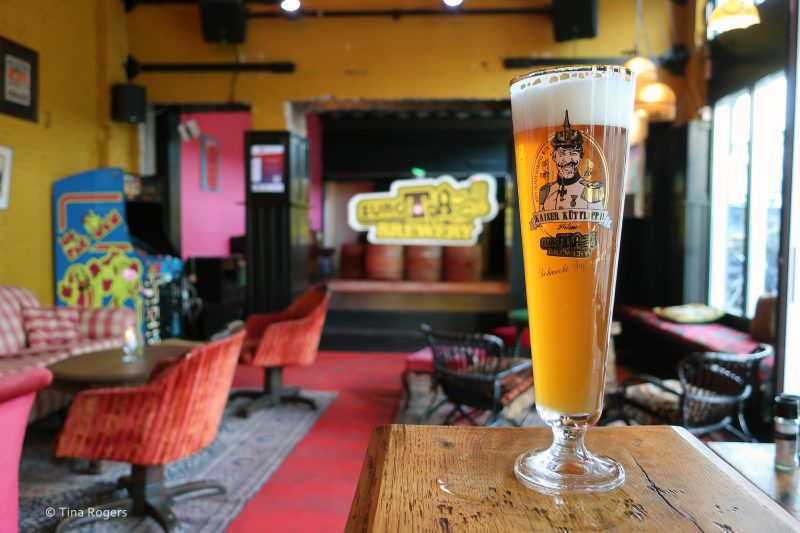 All photos were taken by Tina Rogers, unless otherwise specified.

3 Thoughts to “Behind the scenes at Eurotrash United”