Tis the season! Leaves are on the ground, the days are getting darker. It’s time to enjoy the bock beers! Of German origin, the bock beer style dates back to the 1500’s, one of the few old beer styles to have endured. It is still a popular beer in fall and in spring (a paler version known as maibock), marking the changes of the season. Bock beer is a well-loved beer in Holland and is currently abundant on the shelves at your local supermarket and bottleshop. You probably have a few in the fridge right now. So while you are sipping one, here are five fun facts you may not know about bock beer. 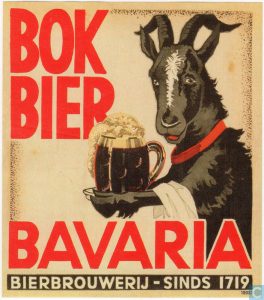 1. Where the name comes from

Bock in German means ‘billy goat’. No wonder you have been seeing goats on most of the bock beer labels! Though a wonderful story, bock beer most likely has a very different origin. The roots of bock beer can be traced back to Einbeck in northern Germany, a trade city part of the Hanseatic league. Due to the good quality of Einbeck beer, it was long imported by Munich before they invited Einbecker brewmaster Elias Pichler to their city to learn how to brew it themselves. Bavarians were known for their ‘funny’ dialect. What started out as Ainpöckisch beer in Einbeck became bockbier in Munich. Though the precise facts are much debated, the majority of (beer) historians agree that this is the most plausible explanation. The visual pun on the beer labels is just for fun!

Legend has it that in 1521 Martin Luther received a mug of Einbecker beer from Duke Erich at the Worms Reichstag and praised it with the words: “The best drink known to man is called Einbecker Beer.”

Brewed as a dark, malty ale centuries ago, the bock beer that we now know and love is actually a bottom-fermented lager, producing smooth, intense flavors. They are lightly hopped and generally dark amber to dark brown in color, with a substantial ABV ranging from 6 to 7,5%. The spring version (maibock or hellesbock) is lighter in color and more hopped, but still brewed to bock strength. Doppelbocks are stronger versions of the traditional bock, around 8% ABV or more.

During the Lent fast, solid foods were forbidden for the monks. Being master brewers, they sustained themselves with doppelbocks. The idea behind this “liquid bread”, as the monks liked to call it, was that liquids cleanse both body and soul. The Paulaner monks in Munich lay claim to inventing the doppelbock style, naming their beer Salvator. As the style became more popular, other breweries adopted the ‘-ator’ name for their own versions, like Ayinger’s Celebrator and Spaten’s Optimator.

Eisbocks are a stronger version of bocks, around 9% – 14%, made made by partially freezing a (doppel)bock and removing the ice to concentrate the flavor and alcohol content, resulting in a thicker body.  A cool allusion to Germany’s Eiswein, made from grapes picked and pressed immediately after a frost has concentrated their juice.

At 14% Samichlaus used to be the strongest lager ever made when it was first produced in 1980, which in those days was quite a feat. It’s high ABV was only possible because the Hürlimann brewery had developed yeasts capable of surviving at such high gravity—something that seems almost commonplace (although still technically difficult) in today’s brewing scene. It was originally brewed in Switzerland and is named after the Swiss-German word for Santa Claus. In later years it was taken over by Brauerei Schloss Eggenberg in Austria. It is truly a seasonal beer and is brewed only once a year on December 6, St. Nicholas Day. Then it’s aged for 10 months before bottling for the next celebration. This beer is definitely high on my wishlist and I could kick myself for not having a taste when I had the chance at the International Beer Festival in Berlin. But at the time I felt I wouldn’t enjoy it as much in the middle of summer. Hope I can get my hands on one another time soon! 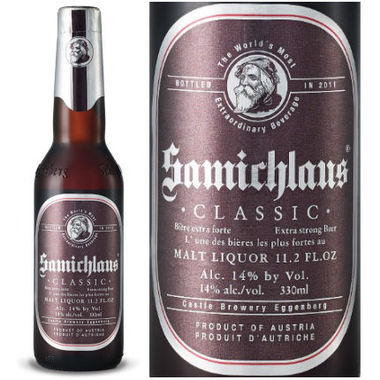