Brouwerij Noordt is a Rotterdam-based brewery that was established in 2015 and makes high-quality accessible beers, but specializes in bottom-fermenting (lager) beers. They have taken lager brewing to the next level with their experimental LagerLab series, which started in 2020 with the release of six Belgian classic ale beer styles that they recreated as lagers. Last month they launched the second LagerLab series based on American pre-prohibition beer styles. For this creative project they chose four historic American beer styles that originated from brewing techniques brought to America by English and German immigrants, but were adapted using the local ingredients available on the new continent. This resulted in four beautiful lager beers: California Common, Pennsylvania Swankey, Philadelphia Cream Lager and East Coast Porter.

The official launch took place in the brewery on November 14 with an exciting beer and food pairing event hosted by Noordt’s Head of Brewing Peter Rouwen and presented by beer ambassador Rick Kempen. The delicious food pairing dishes were made by Perry de Man from Rotterdam’s De Toko. Like the first series, these beers are a limited edition series, so don’t wait to grab your box online or at your local craft beer store. A great present for yourself or for under the Christmas tree!

The current flourishing beer culture is not a new phenomenon in the US. Ever since immigrants landed on the shores of the New World, new beers styles evolved based on the traditional European recipes but adapted to the new environment. For example, European two-row barley did not grow well in the American climate, so brewers used domestic six-row barley instead, which contains more protein resulting in an unwanted haze and a harsher flavor. To soften the astringent taste, brewers started adding maize or rice to the mash, which improved the beers but in modern times is considered an unfavorable ‘adjunct’. The first English immigrants brought their traditional heavy ales, but with the large influx of German immigrants this evolved to well-hopped lager beers and by 1857 lagers were outselling ales. The ultimate demise to America’s brewing culture set in when the First World War and the Prohibition Era commenced. Prohibition was a nationwide ban on the production, import, transport and sale of alcoholic beverages from 1920 – 1933. The alcohol temperance movement had been growing for a while before then, but the First World War was the final blow when an Act was proposed to ban alcohol temporarily to save grain. Many of the pre-Prohibition styles were lost, but lucky for us there are modern breweries like Brouwerij Noordt who are bringing old beer recipes back to life. And they are apparently not the only ones judging by the fact the BJCP style guidelines include the beer style “Historical Beer: Pre-Prohibition Lager”.

Based on the Philadelphia Cream Ale, this was the first beer in the pre-Prohibition serie that Noordt brewed. Cream ales are known for their creamy head (hence the name), but they don’t actually contain any cream or lactose. The use of maize gives it a richer foam layer and thicker mouthfeel, and also helps lower the alcohol percentage. Brewed as an ale, it was lagered at colder temperatures or mixed with lager, resulting in an easy drinking beer that could compete with the increasing popularity of lager beers in the US in the mid-1800s. The Beer Judge Certification Program (BJCP), the American authority on beer styles, describes it eloquently as a “clean, well-attenuated, flavorful American lawnmower beer.”

Noordt’s LagerLab version uses lager yeast and flaked corn, giving it that creamy mouthfeel and crispy light body, while the Cluster hops give it enough bite to hold up to the spicy chicken with coconut and ginger that was served with it. According to Beer & Brewing, Cluster hops are one of the oldest US hops grown in North America and may very well have been used in the original recipes.

This beer style, also known as Steam Beer, almost disappeared but is still around thanks to Anchor Brewing and their famous Anchor Steam Beer that undoubtedly many of you will know or have tasted. It was once a popular style, brought to the US by the Germans in the mid-19th century, though a bit unusual as it is fermented with lager yeast but at warmer (ale) temperatures as a result of the California climate and lack of ice. Being inexpensive, California Common was a typical working class beer, making it a fitting choice for the Rotterdam brewery to recreate.

Brouwerij Noordt first considered making the closely related Kentucky Common, but original recipes were hard to find. The California Common generally has a moderately rich malt character and a dry finish.  Noordt’s version contains some melanoidin malt, which it also used in bock beers and gives its a subtle honey note. Perry paired it was Rendang, an Indonesian coconut beef stew.

This beer was a Western Pennsylvania regional specialty brewed with aniseed, which like many spices and herbs used in times prior to the availability of hops gave the beer additional flavor. If you have ever had a Pastis in the South of France during summer, you’ll know it’s an effective thirstquencher. However, it is also a bit of an acquired taste, perhaps this is the reason the Pennsylvania Swankey never recovered from the Prohibition era?

Peter Rouwen describes the original beer style as a session beer, with a very low alcohol percentage and low bitterness due to the lack op hops which were replaced by a mix of aniseed and star anise. Both were abundantly available in Pennsylvania at the time. Perry paired it with a brilliant nasi dish with star anise, which really brought out the anise flavor in the beer. Love it or hate it, but definitely a well-made beer that is true to style. And is a history beer lesson at the same time!

Also known as Pennsylvania Porter or Philadelphia Porter, the pre-Prohibition East Coast Porter is desribed as a less hoppy version of the American Porter and less caramelly than the traditional English version. The great-grandfather of all Porters has its origins in London, named after the hardworking street and river porters who got most of their carbohydrate fuel from beer (as did many manual workers in the 18th century). It was such a popular beer style, that it became the first beer style to be brewed across the world at the end of the 18th cenury. The traditional English Porter is an ale, but was made by the German community in Pennsylvania using Schwartzbeer brewing techniques and with lager yeast, much like what happened in the countries around the Baltic sea with the Baltic Porter.

Brouwerij Noordt stayed as close to the style as possible by brewing the East Coast Porter as a lager, leaning towards the Schwartzbeer style. Perry made a ketjap saté to balance out the bitterness of the beer and bring out the malt character, an excellent pairing. 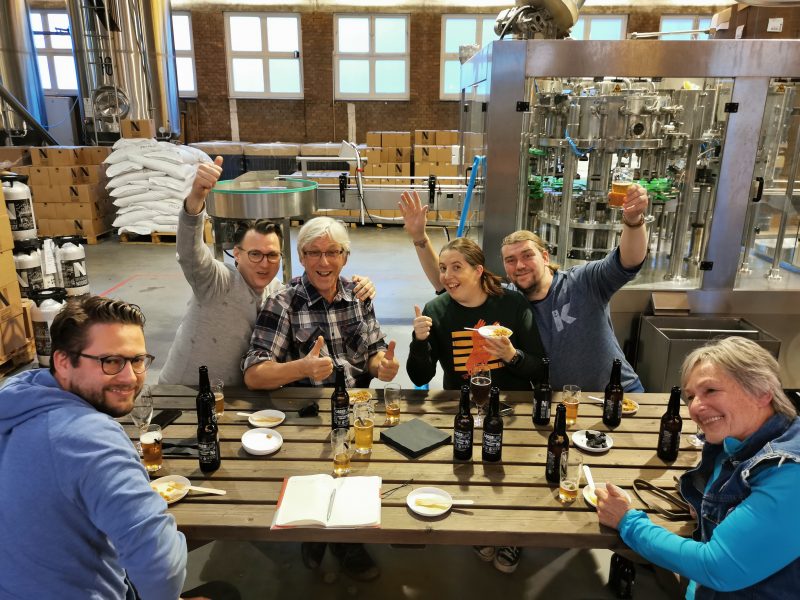 Another excellent beer by one of my favorite Engli