In Delft in the area of the Bieslandse Bos next to a horse meadow there is a small experimental hop field where Sabrina Lindemann and Bart Batteur grow several varieties of hops. A few weeks ago I had the opportunity to pick them, my first time picking fresh hops! An exciting event for me for two reasons: there are not many hop fields in The Netherlands, so this was a fun opportunity. And because of the relatively small amount grown the hops was not being dried, but was put straight into a new Delftse Brouwers brew within 24 hours after picking – a technique known as fresh hopping or wet hopping, which is not commonly used around here.

Together with beer writer Marco Daane and beer sommelier Yu Mey Kwee (and many other volunteers), I helped pick these ‘Dutch’ hops on a rainy Thursday in September. Being used to an office job, standing for six hours is quite a challenge. One thing for sure, all that hard work makes you thirsty!

Sabrina has been growing hops since 2015, first in Binckhorst (The Hague) and now in Delft after she had to move her plants due to redevelopment of the Binckhorst area. She uses her hops to create her own beer Bincks Bloed, brewed annually by different renowned Dutch brewers, such as Kompaan, Crooked Spider and Delftse Brouwers. This year’s batch will be brewed by Delftse Brouwers and released under their own label as Feestende Fazant Fresh Hopped IPA as well as Sabrina’s label Bincks Bloed. The Feestende Fazant IPA is now on tap at Delfts Brouwhuis, so get it while you can!

That is the Latin name for what we commonly know as ‘hops’. In most European languages it has retained some of its origin. In the Scandinavian languages it’s called ‘humle’, ‘Hopfen’ in German, ‘houblon’ in French and in Spanish ‘lúpulo’. The Latin word ‘lupulus’ means small wolf and is most likely a reference to the hop’s tendency to climb very fast and smother other plants.

Hops are quite interesting and difficult plants to grow. They require a lot of attention, but are relatively hardy once established. They prefer temperate climates like that of the Pacific Northwest (Oregon, Washington), areas in Germany (like Hallertau), the Czech Republic and South England (Kent) to name a few examples. They start shooting up in spring and are harvested at the end of summer. At their happiest they can grow 30 centimeters a day! Because they grow on bines, which means the plant grows in a helix as opposed to vines that climb using tendrils, they need to be supported by a structure of wires or a trellis. Though harmless for humans, hop plants have been known to cause dermatitis in some people, so watch out when picking them.

There are seven or more varieties growing in Delft such as Challenger, Hallertau, Chinook, Cascade, Whitbread Golding, but we could not tell which was which. That is quite a lot for a small hop field, but to give you some reference, there are approximately 80 varieties being commercially sold today. The English and German varieties seem to do better in the Dutch weather and are more resilient to the windy conditions. The American Cascade variety is more fragile. Due to the extreme heat this year’s harvest was not as good as last year’s unfortunately, but Delfts Brouwers still received five full bags of fresh hops!

Fun fact: the hop plant is part of the hemp family and a relative of the Cannabis plant, though hops of course doesn’t contain any THC. Other than a shared evolutionary origin, members of the family generally have few common characteristics.

While beer (or its ancient relative) have been around for at least 7.000 years, using hops as an ingredient is relatively ‘new’ phenomenon. Hops have a long and proven history of herbal use as a sedative, yet according to written accounts it has only been used in the beer making process for about a thousand years. It actually didn’t really catch on until about the 1400’s in Germany and even then it took another two hundred years for it to become commonplace in the Lowlands and England. Initially the English wanted nothing to do it with it, so much so that they called a brew made with hops ‘beer’, while their own traditional brews without hops were called ‘ale’. Originally beers were brewed with a mix of herbs – ‘gruit’ – for flavor and bitterness. Most likely the positive characteristics of hops (antibacterial, bitterness etc.) and the heavy taxation of gruit caused it to initially fall out of favor. Of course, the authorities in charge took notice and eventually the use of gruit was even officially banned to prevent brewers from evading the newly installed hop tax.

The cone is where it’s at

The hops used in beer – and the much beloved topic of beer geek conversations – are actually the flower cone of the plant. The lupulin glands of the cones contain chemical compounds that give beer its flavor (see also my blog article ‘The meaning of hoppy‘) such as resins (acids) and hop oils. The alpha acids are responsible for the bitter taste of the beer and ensure its antibacterial shelf life. Depending on when the hops are added in the process during the boil, alpha acids can also add some flavor and aroma. The cones also contain essential oils, which contribute to the aroma. Think of all those wonderful tropical fruit or pine aromas you have been smelling in your favorite beers. Every hop variety contains different proportions of the chemical substances, so the hops used in your beer was chosen very carefully based on the desired result that the brewer had in mind. Next time when you are sipping a delicous brew, find out which hops went into it and you may discover you have a favorite! 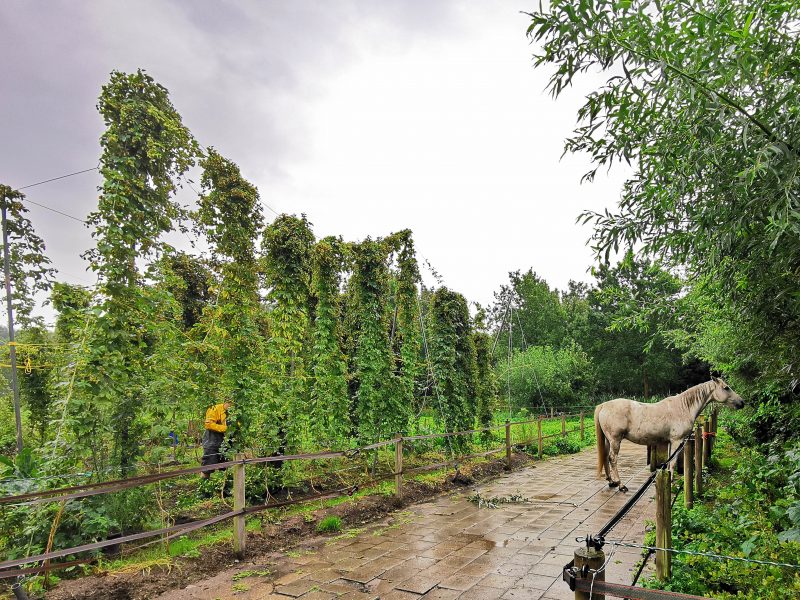 All photos were taken by Tina Rogers.